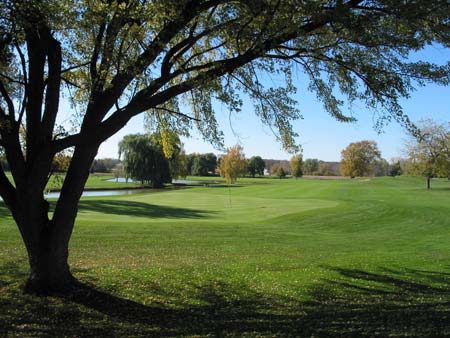 Rolling Meadows opened in 1972 as a 18 hole golf course. In 1993 work started on a complete revision designed by architect Dick Nugent.

In 1996 the new layout opened and featured a 27 hole championship golf course. All but three of the orginal holes were changed.

The courses rolling terrain along with strategically placed bunkers add to the beauty of the links.

Prarie grass, woods, water and a 10 acre wetland accent the layout's natural look. These areas are home to fox, deer, small mammals, owls and birds along with a annual hatch of red tailed hawks.

With 6 sets of tees players of all skill levels can enjoy Rolling Meadows. We have hosted state tournaments, testing the skills of the states best players and we can provide a enjoyable day on the links for casual or begining players.

The course is maintained to "country club" standards with state of the art irrigation and turf equipment. The large bentgrass greens are undulated and true to putt. Modern hybrid bluegrass fairways provide for excellent play for players of all skill levels. Come out and enjoy your game!

Golf Course Superintendents Who Have Served Include:

Golf Professionals Who Have Served Inlcude:

Ready to Reserve your Spot?

Book Now
Connect with us
Close